In France, problems with the start-up of nuclear reactors

Financially troubled French power giant EDF is also fighting a race against time to restart nuclear reactors ahead of the approaching winter. Of the 56 nuclear reactors under its management, about 20 have been out of action for several months, the French news agency AFP reported.

French authorities are looking ahead to the next two months with concern as EDF struggles to restart some reactors. The operation of these was stopped due to micro-cracks that were discovered in the emergency cooling systems.

Despite the fact that hundreds of workers are currently engaged in repairing the reactors, there are still fears that the work will not be completed in time.

Limitation of consumption in companies and households

If the power company fails to start up all the reactors on time, the operation of which is sufficient to cover 70 percent of all electricity needs in the country, it will consequently have to buy the missing amounts of electricity on the European market, where prices have risen sharply in recent months due to the consequences of the war in Ukraine jumped up.

Last week, network operator RTE warned of another problem, namely that power outages are increasing the risk of network loads. As a result, in order to avoid total blackouts, businesses and households could be forced to limit consumption.
Photo: Reuters

In light of the fact that France would become less and less dependent on the import of electricity, the French president Emmanuel Macron calls for the construction of at least six additional new generation nuclear power plants.

Due to the fact that EDT’s operations are burdened with financial debt, which is expected to rise to 60 billion euros by the end of the year, these plans are becoming less and less likely in practice.

The French government appointed a new CEO of EDF on Wednesday. That became Luc Remont, who will succeed Jean-Bernard Levy, whose departure was expected after the government announced in July that it would take full ownership of the debt-ridden energy giant.
Photo: Reuters

In addition to financial problems, the new director will have to deal with employee anger over Macron’s plan to raise the retirement age for civil servants.

PREV Unbelievable: a Russian soldier got a grenade stuck between his ribs, but he didn’t die
NEXT Outbreak on the Majestic Princess cruise ship: 800 infected with the coronavirus 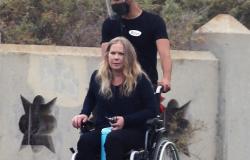